The Scottish city cemented its commitment to tackling the climate emergency, after the City Administration Committee approved the signing of the Circular Cities Declaration.

The declaration, developed by ICLEI Europe and the Ellen MacArthur Foundation, recognises Glasgow as one of the leading European cities working in the circular economy, which aims to decouple economic growth from the consumption of finite resources.

The city will join over 50 others across Europe in working together to raise awareness of the environmental, economic and social benefits of this regenerative economic approach, ahead of hosting COP26 later this year.

City Convenor for Sustainability and Carbon Reduction for Glasgow City Council, Anna Richardson, said: ‘I’m delighted to sign the Circular Cities Declaration, which commits to Glasgow’s transition from a linear to a circular economy.

‘Over the last month, Glasgow City Council, have taken major steps as we look towards net-zero carbon by 2030. The Glasgow Climate Plan was unanimously approved at Committee, and we launched the new business charter and website alongside our Sustainable Glasgow partners.’

She added, “This signing further cements our commitment to supporting Glasgow’s businesses, helping them to adopt sustainable business practices, by encouraging them to reuse and repair goods previously destined for landfill.” 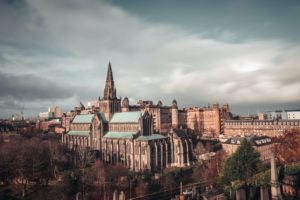 Glasgow has already shown commitment to tackling climate change through its Circular Glasgow initiative, which has run for the past five years.

‘We know that moving to renewables will address around 55% of global greenhouse gas emissions, but it is through a circular economy approach that we will deliver long term sustainable solutions across all sectors. It is ultimately good business.

‘Glasgow’s work to date has already been used as a case study by the Ellen MacArthur Foundation, so becoming the UK’s first city to sign this Cities Declaration is a testament to the progress being made by both our businesses and our partners through the wider city ambitions of its Circular Economy Route Map.’

In related news, Cornwall became the first county in the UK to adopt the concept of doughnut economics.