Less than 10% of carbon emissions from deforestation in the Amazon have been offset by the growth of new forests, according to a study published in Environmental Research Letters.

Forest recovery, the process of growing new forest on land that has previously been deforested, can rapidly capture large quantities of CO2 from the atmosphere.

However, a new study led by an international team of researchers from the UK and Brazil has revealed that the regions with the greatest potential, currently have the lowest levels of recovery.

There is also a big difference in this carbon offsetting between the nine Amazonian countries.

Brazil, which contains more than half of the Amazon and is responsible for the majority of deforestation is falling behind on forest recovery, with just 25% of previously deforested land occupied by new forest and just 9% of its deforestation CO2 emissions being offset.

Ecuador, on the other hand, is leading the way with almost 60% of its deforested land under-recovery. In Guyana, where the recovering forests are older and have recaptured more CO2, nearly a quarter of deforestation emissions have been offset. 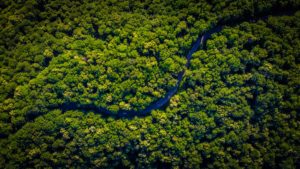 Charlotte Smith, a PhD researcher at Lancaster University and lead author of the study, said: ‘Research in the Amazon typically focuses on Brazil because it holds most of the forest.

‘But there are eight other Amazonian countries. Understanding how forest recovery differs between countries can help us understand which countries’ policies are helping to maintain the forest carbon sink, and which ones aren’t.

‘Data from satellites is crucial for monitoring deforestation across areas as large as Amazonia and is the basis for monitoring the success of countries in achieving their internationally agreed targets for reducing greenhouse gas emissions.

‘This new study is the first comparison of forest loss and recovery between countries across the Amazon. We used high-resolution satellite imagery to map their deforestation, recovery, and carbon stocks from 1986 to 2017.’

The researchers predict that as more accurate data become available on the amount of forest loss and recovery, from national to local scales, this will enable better targeting of interventions to protect and restore the remaining Amazonian forests.