Feature: Bringing the world together on climate change

Omran Hamad Al-Kuwari, CEO of Qatar Foundation International, discusses the role Qatar is playing in mitigating the climate crisis and the importance of not-for-profit organisations in bridging the gap between the public and private sector.

For the past three decades, the international community has been increasingly aware of the seriousness of climate change and its potential impact on human populations. Since then, global efforts have been made to tackle this escalating issue – from the Kyoto Protocol of 1997 to the Paris Climate Agreement of 2015.

Nevertheless, much more action is needed if we are to reverse the damage being done and protect the planet. In 1997, the year of the Kyoto Protocol, the coal percentage in the world energy mix was 38%. Twenty years later it was still the same.

While progress has been made by some countries to meet the targets of the Paris Agreement, at current rates, we are far from being in line with targets to limit global warming to 1.5-2°C.

Over the past 200 years, society has seen many energy transitions, from wood to coal, oil to gas, and more recently the shift to renewables. But unlike many transitions in the past, the green transition is different: it’s purposive.

To achieve our goals, we need the world to commit to fundamental shifts in economic systems. It’s not enough for countries to accept that they need to become more sustainable. They must genuinely embrace transition if they are to become low carbon, resource-efficient and socially inclusive.

Overreliance on technology is an easy trap to fall into. In reality, social organisations are also vital to implementing lasting change. 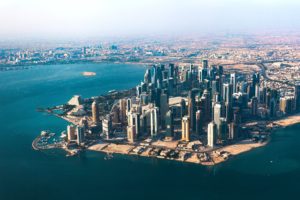 The challenge for Qatar

When it comes to the risks of the climate crisis, smaller, less developed states often stand on the frontline of climate change and bear its burden. Qatar is no exception.

Qatar is one of the most vulnerable countries to climate change in the world. In fact, for every one-degree rise in temperature globally, Qatar will see a three-degree rise. Already, we are recording some of the hottest days on record, with temperatures regularly exceeding 45 degrees Celsius.

On top of this, Qatar is among the 10 countries that will be most impacted by rising sea levels. The country already lacks arable land and water resources for the development of carbon sinks, forests, and green areas.

If sea levels continue to rise, the coastlines of Qatar and its marine life will be affected, land degradation will occur, and freshwater levels will fall. Added to increasing temperatures, this could result in rising underground water salinity and falling freshwater levels that would threaten water security and reduce the efficiency of the region’s vital desalination plants.

Our history in Qatar coupled with the threat we now face puts us in a unique position when it comes to climate change.

Having thrived in the past on an oil and gas-based economy, and currently playing a positive role in most of the world in switching away from coal, we have recognised the need to transition to a more sustainable, future-proof model in the long term. As a small nation, our contribution to global emissions figures is limited.

But, as both a producer of fossil fuels and a country especially threatened by sea-level rise, we are very attuned to the challenges and benefits of decarbonisation

We now see ourselves as somewhere that can facilitate the difficult conversations about the energy transition already taking place between the Global South and Global North, and we hope to inspire change internationally. 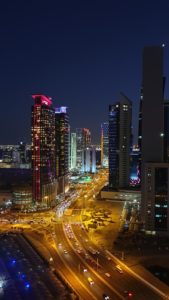 When we talk about transitioning, people often think of this at the policy level or in terms of the everyday changes made by the public. However, a resilient energy ecosystem actually has three key players: public bodies, private actors and the general population.

We can achieve much greater progress by recognising the unique role that not-for-profit organisations can play in the green energy transition. Their power lays in the fact that they are perfectly placed to work with both governments and the private sector, and bridge innovation gaps.

We’re doing this through our work at Qatar Foundation, where we are actively working toward the management of risks associated with climate change, such as water security, via the Qatar Environment and Energy Research Institute (QEERI).

QEERI helps to bridge the gap between all key players in the energy ecosystem by advising the Qatari government, conducting environmental research and assessing the economic impact, and helping to help implement government policy and economic measures. It’s a role that cannot be underestimated.

It is clear we need to look beyond the 1.5-degree target if we want to succeed in making permanent, positive changes to the environment. Currently, too many initiatives are economically driven at the expense of sustainability, and this needs to change.

We need to recognise the role that not-for-profits can play as brokers and intermediaries of climate information. From their close engagement with individuals and communities to their ability to facilitate interactions between scientists, decision-makers, and local communities – these organisations can help us to meet our climate targets and ensure the right transitions are made effectively.

Great article! One point that caught my attention is that over reliance on technology is a trap, in fact we tend to forget that technology can be energy consuming!
I strongly believe that the only way to overcome climate change is finding the right balance between the use of all sources of energy, level of consumption (ie. food, water), waste management, carbon stockage, etc. It’s an equation with multiple variables. For instance, as the spotlight is currently on clean hydrogen, few are pointing out how high it’s water consuming!
The world has for once to sit and think about the future of the planet and start smoothly a decelerating process and a proper allocation of resources instead of constantly chasing the non sense infinite growth. Outdated financial theory should be put aside, it tends to create turmoil in a time where we need long term strategy , solidarity and courageous policies free from financial and political burdens.
Again it’s all about balance.