All urban green spaces, including roadside verges, play a key role in biodiversity and public health, according to a new study, published in Science Advances.

The researchers took soil samples from different types of urban green space across 46 cities from 17 countries. This included the Olympic Park in Beijing and the Retiro Park in Madrid.

The authors found that all urban green space supports many fast-growing microbes that are critical for sustaining productive ecosystem services, such as filtering pollutants and sequestering carbon dioxide. 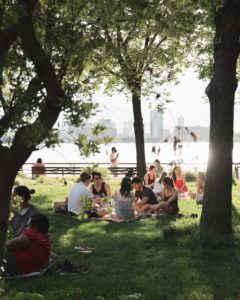 Not only do parks and gardens make up most of the open spaces available for recreational activities such as sport and social engagement, but they also play an important role in curbing pollution, reducing noise, and lowering air temperatures, the study says.

With 68% of the global population set to live in cities by 2050, the researchers have therefore highlighted that urban green spaces are critically important for promoting mental and physical wellbeing.

Moreover, the researchers have also highlighted that human exposure to soil microbes has been shown to be beneficial to human health by promoting effective immunoregulation functions and reducing allergies.

Professor Eldridge, the co-author of the study, said: ‘Parks are not the homogenised ecological deserts that we think they are – they are living ecosystems that do amazing things.

‘City parks harbour a range of microbial communities that are different to natural ecosystems.

‘Some European cities have policies to protect the natural vegetation along footpaths and roadsides. These pathways then become mini-green spaces, linking larger green spaces.

‘We need lots of different microbes, and to get this, we need a variety of landscapes such as median strips, parks, and nature reserves.’

Lead author Dr Manu Delgado-Baquerizo said the study found that urban green spaces from all over the world are very similar.

‘They often have lawns, and similar management practices, which tend to homogenize the microbes living in different global cities,’ he said.