‘Green mining’ could be key to a sustainable future

Researchers demonstrate how extracting precious metals from volcanoes could pave the way to net-zero.

Magma beneath volcanoes releases gases that rise towards the surface, these gases are rich in metals.

As the pressure drops, the gases separate into steam and brine. Most metals dissolved in the original magmatic gas become concentrated in the dense brine, which in turn gets trapped in porous rock.

Researchers from the Department of Earth Sciences at the University of Oxford have revealed that this brine is a potential ‘liquid ore’ containing valuable metals, including copper, lithium and gold – which are key metals in the transition to net-zero due to their importance in electricity generation, transmission and electric vehicles.

Conventional mining involves extracting metals from deep pits or underground mines in the form of solid ores that then need to be crushed and processed. In the case of copper over 99% of the crushed rock is wasted.

Such mines are environmentally impactful, very expensive to construct and decommission, produce huge piles of waste rock, and are very energy-demanding and CO2-producing.

The scientists say that geophysical surveys of volcanoes show that almost every active and dormant volcano hosts a potentially exploitable ‘lens’ of metal-rich brine. 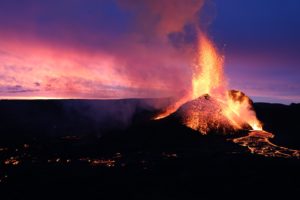 Professor Jon Blundy, lead author of the study said: ‘Getting to net-zero will place unprecedented demand on natural metal resources, demand that recycling alone cannot meet. We need to be thinking of low-energy, sustainable ways to extract metals from the ground. Volcanoes are an obvious and ubiquitous target.’

‘Active volcanoes around the world discharge to the atmosphere prodigious quantities of valuable metals. Some of this metal endowment does not reach the surface but becomes trapped as fluids in hot rocks at around 2 km depth.

‘Green mining represents a novel way to extract both the metal-bearing fluids and geothermal power, in a way that dramatically reduces the environmental impact of conventional mining.’

‘Continuing the de-risking work, which we are pursuing on many fronts through international collaboration, is important. Likewise, we need to identify the best test-case volcano to drill an exploration well.’

The researchers say that a working ‘brine mine’ could be 5-15 years away, depending on how well the challenges can be addressed.