Episode 4 of the Environment Journal Podcast is available now

This month in the Environment Journal Podcast series there is a bonus edition when I chat to James Bellinger, who is a senior air quality consultant with Arup. This is a sponsored Podcast to celebrate Clean Air Day.

The subject of air quality is important across the piece of climate change and of particular relevance to readers of Air Quality News. It is staggering that the Royal College of Physicians and the Royal College of Paediatrics and Child Health estimate that 40,000 premature deaths per annum are linked to poor air quality and other figures suggest this number could be as high as 8.7m worldwide.

I started by asking James to explain the basic concepts of air quality, from the different gases involved, to particulate matter. It is necessary to be familiar with what is involved. 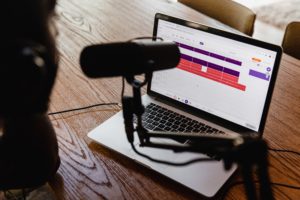 We also touched on the news story that has publicised this area in the case of Ella Adoo Kissi Debrah – the 13-year-old girl from London whose death in 2013 made history by being the first time that a Coroner had found that air pollution had made a material contribution to death. In a landmark decision, Coroner Philip Barlow said that Ella ‘died of asthma, contributed to by exposure to excessive air pollution.’ This case has definitely helped raise the profile of air quality.

As in the other Podcast this month, with Professor Chater of the Warwick Business School, it was also necessary to touch on the Covid-19 Pandemic. Of course, with lockdowns and considerably reduced economic activity, a false lull may have been witnessed in air pollution. The question is surely whether this is sustainable?

James emphasised areas of concern: the planning and design of buildings (where there is groundbreaking work being undertaken) and the construction of the buildings themselves to promote better air quality.

Another area of importance to local authorities is clean air zones and I wanted to clear up the differences between the different schemes proposed and implemented. Despite more than 60 LAs since 2015 having been ordered by the Government to tackle illegal levels of air pollution, this is also being affected by Covid as many of these schemes have now been delayed or scrapped. An example is Leeds City Council, where the authority has announced that such a scheme is not needed anymore, due to changes implemented since its proposal was first publicised!

Arup is involved in a wide range of other actions to combat poor air quality and many of these were mentioned. Areas such as:

Air quality will continue to be at the forefront of activity in climate change for some time to come, but it is clear that there is still a long way to go.