Restoration work on Hampstead Heath has begun, after a huge rise in visitors during the Covid-19 lockdowns has left the site damaged.

Hampstead Heath is one of London’s most popular open spaces, attracting almost 10 million visits a year.

While the park has provided crucial green space for many Londoners during the pandemic, the site has suffered as a result, with disturbed wildlife habitats, trampled grass, soil compaction and eroded paths, worsened by the wet weather over the winter. 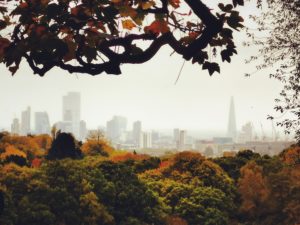 Chair of the City of London Corporation’s Hampstead Heath management committee, Anne Fairweather, said: ‘I was delighted to see so many people enjoying Hampstead Heath during the lockdown but the rise in visitors gave us some challenges.

‘Our teams are working hard to restore wildlife habitats, grassed areas and damaged paths and we can already see some sites recovering.’

The City of London Corporation has started the first phase of ground restoration work, with new fencing being installed to protect veteran trees and areas of grassland reseeded.

New hedging is also being planted to protect path edges and encourage natural regeneration, providing new habitats and boosting biodiversity at the site.

The restoration work is expected to continue until the Autumn, but the recent warm weather has helped the grass to establish and several areas that were closed have now reopened.

The park is recognised as a Site of Metropolitan Importance for Nature Conservation and contains some of the best examples of the capital’s habitats, including rare and important species which are of particular significant in a heavily built-up area of London.

In related news, a previously derelict section of land around Kendall’s Wharf has been transformed into a wildflower meadow, as part of the North Portsea Island Coastal Defence Scheme, which protects residents and businesses from coastal flooding.