Wildfires in the UK are particularly dangerous, they can displace and destroy wildlife, damage peatlands and risk human health through air pollution.

Peatlands, which are often damaged by wildfires play an important role in the fight against climate change, capturing and storing carbon, reducing flood risk and supporting biodiversity.

The GMFRS warns that with hotter summers and wetter winters, wildfires are now becoming the norm. 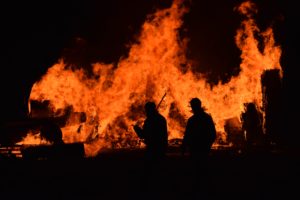 GMFRS station manager Dave Swallow said: ‘GMFRS is committed to supporting Greater Manchester’s Five-Year-Environment Plan, and as outlined in its new Fire Plan will be refreshing its Sustainability Strategy to ensure the Service is resilient to potential impacts of the climate emergency.

‘Wildfires can have a hugely negative impact on the environment, and the release of greenhouse gas emissions into the atmosphere is also a contributing factor to climate change. This is why we continue to urge people to take care when visiting the countryside and never be tempted to light barbecues or campfires on the moors.

‘We are now approaching the third anniversary of the 2018 moorland fires, which remain fresh in the minds of everyone involved – from our firefighters who worked incredibly hard to put the fires out, to the residents who were forced from their homes. There is no better time to remind people that the smallest action can have catastrophic consequences, putting people’s safety – and our natural environment – at risk.’

GMFRS is currently working with a number of partners locally and across the UK, to prevent and further understand wildfires.

They are currently leading a survey on behalf of UK fire and rescue services to gather public views about wildfires. The survey closes on August 31, with results to be used to shape future work around wildfires. The survey should take around 10 minutes to complete and can be found on GMConsult.