Silvertown Tunnel a pollution solution or an environmental disaster?

Feature: Environment Journal speaks to the campaigners protesting against the Silvertown Tunnel to find out why this has become one of London’s most controversial infrastructure projects to date.

In 2018, Transport for London (TfL) secured planning permission for the Silvertown tunnel. The plans include the creation of a four-lane trunk road under the River Thames that will connect the Boroughs of Greenwich and Newham.

The aim of the project is to reduce cofngestion on the existing Blackwall Tunnel. TfL has said: ‘Without the Silvertown Tunnel, congestion and air quality around the Blackwall Tunnel are predicted to get worse as London’s population grows.’

They have also said that the Silvertown Tunnel will: ‘Improve the reliability and resilience of the wider road network and allow for better transport links, with more cross-river bus journeys planned for East London.’ 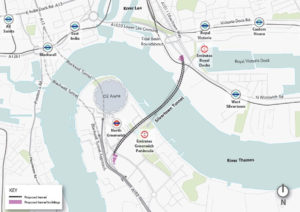 Since the initial proposal, the project has faced intense scrutiny from MPs, Cllrs and activists who have warned that the tunnel will lead to further air pollution.

Simon Pirani, lead of Stop Silvertown Tunnel and senior research fellow at the Oxford Institute for Energy Studies told Environment Journal: ‘The project will lead to four more lanes of traffic, to put it simply, that means extra traffic and that equals extra pollution.’

In January 2021, a group of 25 GP’s, nurses and specialists, including experts in child health and respiratory disease warned that the tunnel will cause more traffic through some of the most deprived and polluted boroughs in the country.

In their letter, the doctors said that building new roads always leads to more cars and argued that the £2bn cost of the tunnel should instead be used to boost walking and cycling and subsidise public transport.

However, in March 2021, auditor EY said that the Silvertown Tunnel is the best option available to alleviate congestion at the Blackwall Tunnel.

Despite this assessment, campaigners have continued to express concern about the disproportionate health impacts and last month, 600 protesters marched through Newham where the tunnel will travel from to connect with the Greenwich Peninsula. 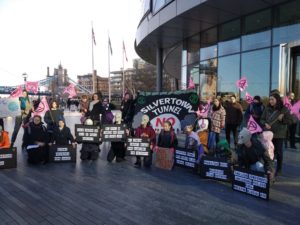 Rosamund Kissi-Debrah, whose nine-year-old daughter Ella was the first person in the world to have air pollution on their death certificate, sent a message of support to the rally, she said: ‘The Silvertown Tunnel means even more people will be impacted by air pollution. The children of Greenwich have suffered enough and deserve a better quality of life. All parents living in the borough must get involved, it affects everyone.

‘Ella’s death tells us we must never create more toxic air, but less. Building roads always means more traffic, and not less. Please continue to fight for the sake of your children’s health.’

The protesters have also highlighted that the plans will lead to additional traffic outside various schools in Newham and Greenwich. Newham is already one of the most polluted boroughs in London and is also one of the most deprived.

According to Trust for London, more than half of children (52%) are judged to be in households in poverty, compared to 38% in the typical London borough. Greenwich is also in the bottom-most deprived quarter of all local authorities in England

Miriam Scharf, a member of the National Education Union who has been heavily involved in the campaign, told Environment Journal: ‘You can’t increase road traffic around our schools, and think that it is not going to be worse for a lot of working-class, black and ethnic minority children.

‘There’s nothing more important than children’s health, and I think if more people knew about the health implications of this tunnel they would be in opposition to it.’

Despite the Mayor’s continued support for the project, those involved in campaigns show no sign of giving up, Simon Pirani concluded: ‘A lot of people ask us, is it too late to stop it? The answer is absolutely not, in fact, a lot of projects get stopped at the last minute.

‘Although there have been specific reviews into the project, they haven’t asked the bigger question about the overall Transport Strategy. If they reviewed the larger strategy and properly looked at the issues of air pollution and climate change, the thing would be dead in an instant.’