Climate change is driving intense slow-moving storms across Europe, according to researchers at Newcastle University and the Met Office.

The researchers used pan-European climate solutions to estimate the likelihood of heavy rainfall. They found that by the end of the century, slow-moving storms may be 14-times more frequent.

These slow-moving storms are particularly damaging and can lead to very high precipitation and flash floods, with devasting impacts, like was seen in Germany and Belgium.

The researchers have highlighted that These findings are relevant to climate mitigation and adaptation policy in Europe. Accurate predictions of future changes in heavy rainfall are key to effective adaption and mitigation policy and findings may have specific implications for future flooding impacts, the design of infrastructure systems, and the management of water resources. 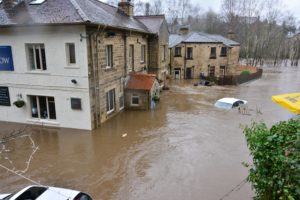 Professor Hayley Fowler, of Newcastle University’s School of Engineering, said: ‘Governments across the world have been too slow in reducing greenhouse gas emissions and global warming continues apace. This study suggests that changes to extreme storms will be significant and cause an increase in the frequency of devastating flooding across Europe.

‘This, alongside the current floods in Europe, is the wake-up call we need to produce improved emergency warning and management systems, as well as implementing climate change safety factors into our infrastructure designs to make them more robust to these severe weather events.’

Professor Lizzie Kendon, science fellow at the Met Office and Professor at Bristol University, added: ‘This study shows that in addition to the intensification of rainfall with global warming, we can also expect a big increase in slow-moving storms which have the potential for high rainfall accumulations. This is very relevant to the recent flooding seen in Germany and Belgium, which highlights the devastating impacts of slow-moving storms.

‘Our finding that slow-moving intense rainstorms could be 14 times more frequent by the end of the century under the high emissions RCP8.5 scenario, shows the serious impacts that we may expect across Europe if we do not curb our emissions of greenhouse gases.’