Each wind farm will be in a different North Atlantic location, each farm consisting of 1,000 wind turbines will have its own dedicated cable linked to the uK.

The wind turbines will be connected to the UK by long-length, high voltage direct cables.

The total project is estimated to cost £21bn, with these cables alone costing £200m.

The wind farms will be under the exclusive control of the UK’s electricity system, making this the first captive wind farm in overseas terrotrial waters. 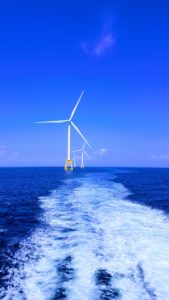 The energy geneation is expected to coincide with the UKs decommissioning of the last coal-fired power plants and the last of its original generation nuclear power plants.

HIP have said that they hope this project will create more long term, high value jobs across the UK.

Sir Tony Baldry, chairman of HIP said: ‘HIP Atlantic fulfils the Prime Minister’s vision of attracting investment and job creation in the North of England as part of this country’s ambitious policy to make Britain the world leader in offshore wind energy.

‘We will stretch the zone of British-operated wind generation outside of our traditional territorial waters, pushing the boundaries of existing cable technology to generate over 1,000 kms from our grid landfall points throughout England.’

In related news, Lancaster has the highest number of offshore wind installations in the country, according to new analysis by comparison site Uswitch.

This is then followed closely by Aberdeenshire and Tendring – which both have three.

The researchers found that Stoke-on-Trent has the largest number of new installations, these are nearly entirely made up of photovoltaics with an 86% increase from its original total in 2015.