1.26 billion face displacement due to the climate crisis

1.26 billion people are at risk of conflict and displacement due to environmental damage, warns a new report published by the Institute of Economics and Peace (IEP).

The report finds that there is a cyclical relationship between degradation and conflict. It is a vicious cycle, where degradation of resources leads to conflict, leading to further resource degradation.

The number of malnourished people has been steadily rising since 2016 and is forecast to rise by 343 million people by 2050, creating another driver for conflict.

Sub-Saharan Africa has the highest prevalence of food insecurity, with 66% of the population deemed food insecure.

The report also reveals that by 2040 over 5.4 billion people will live in countries facing extreme water stress. Lebanon and Jordan are the countries most at risk.

Currently, 1.26 billion people live in hotspot countries, suffering from both extreme ecological risk and low levels of resilience. These countries are least likely to be able to mitigate and adapt to new ecological threats, which is likely to cause mass displacement. 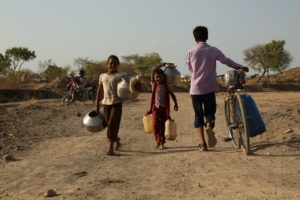 The number of people displaced by ongoing conflict has been steadily rising, with 23.1 million people from hotspot countries currently living outside their home country.

Europe was hosting the largest number of displaced people from hotspot countries, at 6.6 million. The report states that these numbers are likely to increase by tens of millions as ecological degradation and climate change takes hold.

Steve Killelea, founder & executive chairman of the Institute for Economics and Peace, said: ‘COP26 provides an ideal opportunity for leaders to recognise that the ecological threats of today need to be addressed before climate change substantially accelerates them, costing trillions more to address.

‘The solution to these problems lies in a more systemic approach, partially through the conscious integration of development agencies. The problems of conflict, food and water insecurity, displacement, business development, health, education and indeed climate change are interrelated, and the interconnectedness of these relationships must be recognised for them to best be addressed.’